Former Friends, Romantic Interests, Husband and Wife, Allies; Initially, they got off on the wrong foot and eventually, fell in love with each other; married with one son; have a grandson and two great-grandsons.

Being the love of his life, Newt first met his future wife in New York during the year of 1926, where they got off on the wrong foot after she caught him perform magic in front of a Muggle. However indifferent they were to each other, Newt and Tina held an affection for each other after she fell in love with Newt due to his kind and tender heart. With time, Newt became more and more conscious of Tina's virtues, seeing that she was a good-hearted person and that her previous desire to report his misdeeds to the superiors might have resulted from ignorance and willingness to prove that she could return to an Auror position. The search for the missing creatures set loose on New York brought the two closer together. Newt later helped Tina get reinstated to her position as an Auror after telling Seraphina Picqueary. She promised to buy his book but Newt promised to deliver a copy in self as soon as it was completed.

In 1927, Tina and Newt were unable to see each other due to his travel ban administrated by the British Ministry of Magic and could only contact teach other via letters. However, Tina's and Newt's relationship became strained when a magazine erroneously printed that Newt was engaged to his former lover Leta Lestrange. Though it was simply a misunderstanding, Tina believed the magazines mistake and eventually, cut ties with Newt and began seeing someone else after he called Aurors "self-driven hypocrites." Newt later kept a picture of Tina in his suitcase, this time, for anyone to see rather than keeping it hidden like Leta's.

When they meet again, Tina treated Newt coldly, calling him "Mr Scamander" once again. Nevertheless, Newt eventually managed to subtly confess his feelings for her, awkwardly stating that she had "eyes like a salamander". The two worked together once again when Grindelwald was summoning his followers, bringing the two of them closer.

By 2017, they were already married and living in the United Kingdom and proud grandparents of Rolf Scamander. 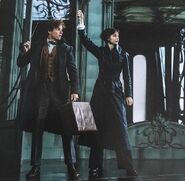 Retrieved from "https://harry-potter-and-fantastic-beasts-films.fandom.com/wiki/Newt_and_Tina?oldid=721"
Community content is available under CC-BY-SA unless otherwise noted.