Hogwarts School of Witchcraft and Wizardry

Fantastic Beasts and Where to Find Them

Fantastic Beasts: The Crimes of Grindelwald
Newton Artemis Fido "Newt" Scamander is one of the main characters and one of the main protagonists in the Fantastic Beasts and Where to Find Them film series. Born to Mrs Scamander and the younger brother of Theseus Scamander, Newt became a Magizoologist despite his family's dislike in his choice of occupation, he became fascinated with magical creatures. Playing an essential role in the downfall of Gellert Grindelwald, Newt traveled to New York in 1926 and Paris in 1927, even befriending a muggle, Jacob Kowalski and falling in love with two women: Leta Lestrange and Porpentina Goldstein, his eventual wife.

Newton "Newt" Scamander was born February 24, 1897, the youngest son and child of Mr and Mrs Scamander and had one sibling, an older brother named Theseus. It is unknown if he is pure-blood or half-blood.[1]

Newt was interested in Magizoology since his mother was a Hippogriff breeder. However, his parents did not like that he wanted this. At age elven, he was accepted into Hogwarts School of Witchcraft and Wizardry and sorted into Hufflepuff and attracted the attraction of his professor, Albus Dumbledore, who grew fond of Newt while he was learning at Hogwarts. During one of his lessons with Dumbledore, he turned his boggart into something. Newt was later expelled from Hogwarts, but was able to keep his wand. He got a job in the British Ministry of Magic in the Beast Division of the Department for the Regulation and Control of Magical Creatures.

In 1918, Newt was commissioned by Augustus Worme of Obscurus Books to write the first edition of Fantastic Beasts and Where to Find Them, since Scamander's employement was lowly paid for and wished to travel the world. At one point, Newt met an Obscurial girl in Sudan. He contained her Obscurus.

Fantastic Beasts and Where to Find Them

In 1926. Newt travelled to New York to release his Thunderbird Frank in Arizona. However, while he is at the bank, he meets the Muggle, Jacob Kowalski, who sees magic. Newt attempts to obliviate Jacob's memories, but the No-Maj thinks that TNewt is Crazy and distracts him while stealing his suitcase, but Jacob takes the wrong one.

Along the way, Newt meets and befriends Jacob, and the Goldstein sisters, Tina and Queenie. They work together to recapture all the monsters let loose on New York while uncovering the Obscurus attacking the No-maj community. 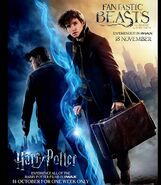 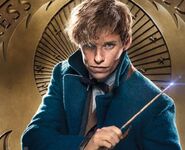 Retrieved from "https://harry-potter-and-fantastic-beasts-films.fandom.com/wiki/Newt_Scamander?oldid=802"
Community content is available under CC-BY-SA unless otherwise noted.