Leta Lestrange is a character in JK Rowling's Fantastic Beasts and Where to Find Them. She was once a friend of Newt Scamander and is currently engaged to his brother, Theseus. Leta is portrayed by Zoe Kravitz.

Leta comes from the Lestrange family, a family infamously known for mastering in the Dark Arts. She was the half-sister of Corvus Lestrange, whom she felt guilty for abandoning, as the baby drowned when she was a child. Leta was once a friend of Newton "Newt" Scamander. One of her experiments endangered the life of another student, and Newt  took the blame. Despite their animosity, Newt kept a  photo of Leta with him. Leta eventually began to work at the British Ministry of Magic and became engaged to Newt's brother, Theseus. 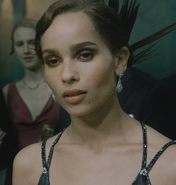 Retrieved from "https://harry-potter-and-fantastic-beasts-films.fandom.com/wiki/Leta_Lestrange?oldid=493"
Community content is available under CC-BY-SA unless otherwise noted.